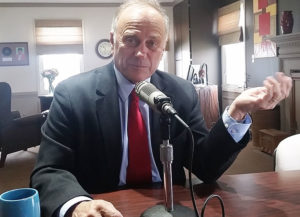 Iowa Congressman Steve King agrees with South Korea’s president and a crowd in Michigan who rallied with President Trump Saturday night — that Trump should get the Nobel Peace Prize. King says the thought crossed his mind when Trump accepted the invitation of North Korea’s leader to meet in person and discuss getting rid of nuclear weapons on the Korean peninsula.

“If that happens, I think there isn’t any question about it,” King said today in Mason City. “I think he should have the Nobel Peace Prize because he’s the one who initiated this. We could have gone along with the same old pattern we had with the North Koreans developing more and more nuclear capability and more and more ability to deliver it and now, Kim Jong Un said just yesterday or the day before that he would give up all of his nuclear weapons if we just promise not to invade him.”

King, a Republican from Kiron, indicated this is the first step in opening up the border between North and South Korea and the possible reunification of the countries.

“We saw what happened in Germany when the traffic flowed. It wasn’t very long at all and they were unified,” King said. “I said when he accepted the invitation from Kim Jong Un that could be his equivalent to Reagan’s ‘Mr. Gorbachev, tear down this wall!'”

The looming question is whether North Korea and Kim Jong Un can be trusted after two previous summits this century have later proven fruitless. King said he thinks North Korea this time is heading in the right direction.

“Back to Reagan: ‘Trust but verify.’ This is the furthest, though, that we’ve seen North Korea go on this path and I think that they understand that Donald Trump is not joking,” King says. “He’s not kidding around and I think they are concerned that there would be action taken to eliminate their nuclear capability.”

King said he thinks the Trump Administration’s decision to drop a massive bomb in Afghanistan on an underground stronghold for al Qaida made Kim Jong Un worry Trump might bomb North Korea, too.