You are here: Home / Crime / Courts / Pottawattamie County to mark one year anniversary of death of deputy 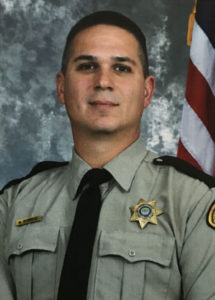 Tuesday will be a somber day for the law enforcement community in Council Bluffs, marking one year since the death of Pottawattamie County Sheriff’s Deputy Mark Burbridge. He was shot to death by an escaping inmate who was later caught after a car-jacking in Omaha.

Sheriff Jeff Danker says while a year has passed, the incident is still fresh in everyone’s minds. “When something like this happens, it pretty much changes everybody,” Sheriff Danker says. “It can happen. Law enforcement is a dangerous profession. It brings home that it can happen anywhere at any time to anybody.”

Another deputy was shot and wounded in the incident which happened during an inmate transfer. The sheriff says there was an immediate and generous outpouring of sympathy that’s continued for all these months. “The other law enforcement agencies, the citizens, everybody’s been so supportive,” Danker says. “We really appreciate it. When a tragic event like this happens, it really helps you get through it by having the support of your community behind you.”

On Tuesday, law officers will be putting black bands on their badges, there will be a moment of silence at the time of the shooting, and flags across the county will be at half staff. There’s also a service planned this weekend in Council Bluffs featuring a life-size sculpture of a horse.

“On Saturday, they’re going to have the unveiling of this Horse of Honor at the old Squirrel Cage Jail,” Danker says. “A number of different artists have put different work on that horse, just things that were special to Mark in his life.” The inmate accused in the death of Burbridge is 25-year-old Wesley Correa-Carmenaty. He was sentenced to life in prison, plus 175 years after he entered guilty pleas to first-degree murder, attempted murder, escape, kidnapping and other crimes.

(Karla James contributed to this report)