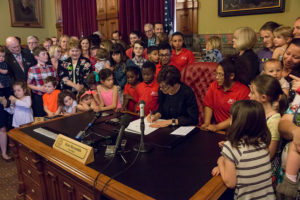 Governor Kim Reynolds this afternoon approved the most restrictive abortion law in the country.

“I believe that all innocent life is precious and sacred and, as governor, I have pledged to do everything in my power to protect it,” Reynolds said. “And that’s what I am doing today.”

The new law forbids abortions after a fetal heartbeat is detected, which happens around the sixth week of a pregnancy. Three hours before the governor approved the measure, officials from Planned Parenthood of the Heartland and the American Civil Liberties Union of Iowa announced they’d go to court to block the law from going into effect. Backers of the abortion ban are hoping this legal dispute goes all the way to the U.S. Supreme Court and wind up overturning the 1973 decision that legalized abortion.

Reynolds acknowledged the looming legal battle in brief remarks before she signed the bill into law.

“I understand that not everyone will agree with this decision,” Reynolds said. “But if death is determined when a heart stops beating, then doesn’t a beating heart indicate life?”

Many in the large crowd of bill backers surrounding Reynolds responded with a “hear, hear!” in agreement. Protesters outside the governor’s office could be heard chanting in disagreement as Reynolds continued speaking.

“I understand and I anticipate that this will likely be challenged in court and that courts may even put on hold a law until it reaches the Supreme Court. However, this is bigger than just a law. This is about life and I’m not going to back down from who I am or what I believe in,” Reynolds said, getting a burst of cheers from the crowd surrounding her statehouse desk.

A woman asked the crowd to give “three cheers for Governor Reynolds.” After the “hoorays,” Reynolds asked that legislators be included in the accolades. 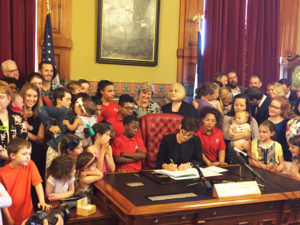 A group of children from a local Christian school as well as the children and grandchildren of the bill’s supporters were among the crowd surrounding the governor’s desk for the event. Reynolds spoke briefly with reporters before leaving the room.

“I’ve seen a lot of positive encouragement and prayers to support life and not to stop a beating heart,” Reynolds said. “This is about life and I believe life is life, whether it’s inside the womb or outside the womb.”

Iowa Attorney General Tom Miller, a Democrat, is currently leading the legal defense of the state’s ban on abortions after the 20th week of pregnancy. Reynolds told reporters even if Miller defends this new law, too, outside attorneys and groups may join the state’s legal team.

“Individuals who are pro-life that are interested in also being a part of this,” Reynolds told reporters.

And the governor said her office fielded those calls before she signed the bill into law.

A couple of dozen protesters outside the governor’s office sang and chanted during the event.