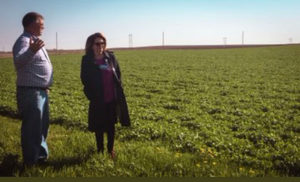 Pelosi’s visit follows her speech last (Sunday) night at a fundraiser for Polk County Democrats, where she told the crowd the Farm Bill Republicans are crafting “weakens the safety net for producers.”

“I was just in the (Des Moines) airport. I saw a big sign that said: ‘Feeding the World. It’s in Iowa’s DNA,'” Pelosi said,” not necessarily these guys in D.C.”

According to Pelosi, the next Farm Bill could come up for a vote in congress this month and she warned it will reduce funding for biofuels.

“Who advises them? Where did they come up with this?” Pelosi said. “…It’s about powering the world from here.”

Pelosi emphasized that the Renewable Fuels Standard was included in the energy bill that cleared congress in 2007, when Democrats were in control, and she said today key Republicans are trying to “undermine” the yearly federal ethanol production mandate.

“Between the waivers and the carve out of the Trump Administration and GOP congress deep in the pocket of ‘Big Oil,’ the Renewable Fuels Standard is under attack,” Pelosi said. “We can fight that in a bipartisan way.”

This morning, Pelosi was joined by local farmers for a discussion about the Farm Bill. None of the Democrats in Iowa who’re running for congress were there. None attended her speech in Des Moines last night either, including Dave Loebsack of Iowa City, the only Democrat in Iowa’s congressional delegation.

Republicans are preparing campaign ads linking Democratic candidates across the country with the unpopular Pelosi.