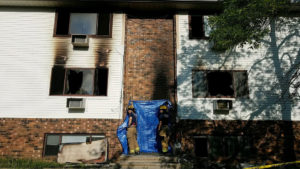 A spokesperson for the Cedar Rapids Fire Department says an overnight fire at an apartment complex on the city’s northwest side is a case of arson.

Greg Buelow says it appears the fire was started in one of the hallways of the three-story building. “This is very serious, when you have at least a dozen occupants inside of an apartment complex and it appears that the fire was intentionally set,” Buelow said. There may’ve been as many as 15 people in the building and many of them were forced to escape through windows.

According to Buelow, it’s unusual for investigators to determine the cause of a fire this quickly. “But, there’s some evidence gathered that made it very clear…I mean, a hallway is not one in which you have your normal combustibles and sources of fire,” Buelow said. “So, that is something investigators are certainly looking at and determined why it was…intentional.” No one has been arrested.

Crews were sent to the complex at 126 Harbet Drive Northwest at 3:42 a.m. When they arrived, firefighters saw heavy flames and smoke — and people hanging out of windows. “In fact, an adult female threw a baby down to an adult male as firefighters were arriving on the scene,” Buelow said. “Several (residents) either jumped out of their windows or used fire escape ladders.” Eight people were taken to hospitals. Most of the injuries were believed to be related to smoke inhalation.

“The victims included an infant and the most serious injury appeared to be an adult female who may’ve fractured her leg,” Buelow said. Smoke alarms were working in the building and likely saved lives.

“Smoke alarms are a key thing in this fire, there’s no doubt about it,” Buelow said. There are six units in the apartment complex and five of them were occupied. Buelow said residents of the building are getting help from the Red Cross.