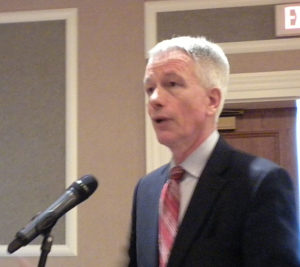 The U.S. Supreme Court has overturned a law which limited sports betting to the state of Nevada.

Iowa Gaming Association president, Wes Ehrecke, says the state’s casinos have been preparing for the possibility of legalized sports betting in anticipation of the ruling. “This ruling is great news and we’d hoped that this would have been the outcome when New Jersey had challenged the constitutionally of only allowing one state — Nevada — to have legalized sports betting for over the last two-and-half decades,” Ehrecke says.

The Iowa Gaming Association represents the 19 state-licensed casinos and pushed for legislation making sports betting legal, but it failed to pass in the last session. Ehrecke says legislators wanted the certainty of the Supreme Court ruling before moving ahead, and he says they hoped the ruling would have come four weeks ago. “But now we will deal with trying to get the education and awareness ready for the next session,” Ehrecke says.

He says they believe the more than two decades of experience in the state-licensed casinos have make them the best places to run sports betting operations. “Certainly our Racing and Gaming Commission having that expertise and integrity and standards being set,” Ehrecke says. “Having someone come into a casino to establish their account, they could do so in person to bet, but also being able to could come through secure portals to have the option bet on their phone or laptop — we believe would be the best option.”

Critics who oppose legalized sports betting say it expands gambling. But Ehrecke says millions and millions of dollars are already bet illegally each year in Iowa and other states. “This is not really an expansion of gambling, but it allows for a more legalized structured and regulated form of what’s already existed — not only in Iowa, but around the country,” according to Ehrecke.

He says casinos have a variety of options if state lawmakers make sports betting legal. “Every casino would probably do something a bit different,” Ehrecke, “but certainly having a sports betting area. Some could be on the gaming floor, some could be incorporated into their existing sports bars they have now. That will be a part of that decision that works best for each respective casino.”

Ehrecke says the first order of business is to get a sports betting law passed.

“We’re looking forward to educating and working with legislators and the media and the public to create awareness about why a legalized sports betting bill hopefully will get adopted here in the next session,” Ehrecke says. The IGA supports a bill that would allow legalized betting on pro and college sports.