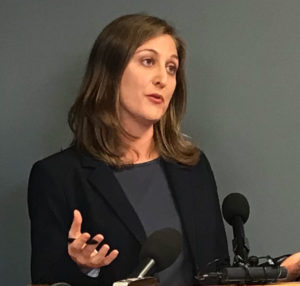 The Planned Parenthood Federation of America and the American Civil Liberties Union of Iowa have filed a lawsuit challenging a new state law they say is a “virtual ban” on all abortions in the state.

“The law would ban abortions as soon as any cardiac activity is detected in an embryo and that typically happens at around six weeks in pregnancy. This is before many women even know that they’re pregnant,” Rita Bettis, legal director for the ACLU of Iowa, said during an early afternoon news conference in Des Moines. “Quite plainly, with this new law, Iowa politicians have tried to ban virtually all abortions in the state of Iowa.”

Planned Parenthood of the Heartland president and CEO Suzanna de Baca said Iowa women will be forced to go out-of-state to get an abortion.

“Or, even worse, we foresee that there would be patients would try to self-induce, often using dangerous or illegal means,” de Baca said, “and that is our biggest concern, the safety of our patients.”

The groups first are seeking a court order to prevent the law from taking effect on July 1. The lawsuit’s ultimate aim is to get Iowa’s Supreme Court to rule the law unconstitutional. 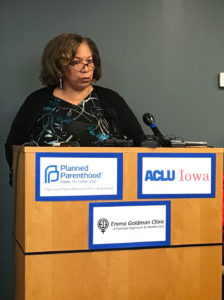 “We think it’s extreme and outrageous,” said Francine Thompson, co-director of the Emma Goldman Clinic in Iowa City, the first outpatient abortion clinic in the state.

Thompson told reporters  the new law would be an “almost-complete ban” on abortions, as about two percent of the abortions at her clinic are preformed at or before the sixth week of a pregnancy.

“It’s a law that has been passed by politicians who are out of touch with the reality of women’s lives,” Thompson said.

AUDIO of news conference in ACLU of Iowa office, 25:00

The law would allow abortions after the sixth week of pregnancy in cases of rape if a women reports the crime within 45 days and in case of incest of the crime is reported within 140 days. Thompson said survivors of rape and incest risk getting kicked out of their home or being victimized again if they report the crime.

“We want politicians out of women’s lives and out of the exam room,” Thompson said. “This law must be struck down.”

The lawsuit has been filed on behalf of a doctor and patients at the Emma Goldman and Planned Parenthood clinics in Iowa.

Governor Reynolds has announced a Chicago law firm called the Thomas More Society will provide the legal defense for the state’s new abortion restriction, so there will be “no cost to taxpayers.”

The legal challenge is starting in Polk County District Court. Whichever way the distic court rules, Bettis acknowledged the lawsuit will be challenged to the Iowa Supreme Court.

“The Iowa Supreme Court has long been a stalwart protector of individual rights, recognizing those rights under our Iowa constitution,” Bettis said, “…so in this case, we thought it was appropriate to bring this case in front of the Iowa court.”

The lawsuit’s claims are focused on the Iowa Constitution. That’s a tactical move to try to avoid having this case heard in federal courts, where it might wind up as a test case to overturn Roe v Wade.

“Iowa will not go back in time by taking away this right,” de Baca said. “Planned Parenthood is challenging this law because the Iowa Constitution is clear. A woman has the right to access a safe and legal abortion.”

Reynolds, who signed the new abortion law on May 4, said at the time she would not “back down” from a legal challenge.

“I believe that all innocent life is precious and sacred and, as governor, I have pledged to do everything in my power to protect it,” Reynolds said during the bill-signing ceremony in her statehouse office. “And that’s what I am doing.”