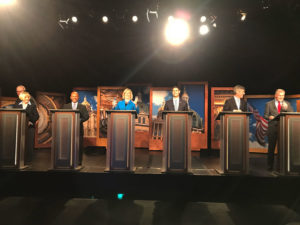 The Democratic candidates running for governor.

John Norris, a long-time aide to former Governor Tom Vilsack, said Republican Governor Reynolds should respond to critics who contend cannabis products intended for medical use will be exploited as recreational drugs.

“The governor’s not leading when she needs to,” Norris said last night on IPTV. “People are suffering in this state. She’s spending all her political capital on tax cuts for millionaires. As governor, I would spend some political capital on educating Iowans about how this helps people. Let’s get over this paranoia…and get this fixed for people who need it.”

All six candidates were asked about the issue during a 90-minute “Iowa Press” forum sponsored by Iowa Public Television.

Ross Wilburn of Ames, the former mayor of Iowa City, said it’s an “over-reaction” to suggest there is a “direct line” between medical cannabis and recreational marijuana.

“There are people who are hurting now,” Wilburn said. “My mother died of cancer in 1985 when I was 20. She could have certainly benefited from medical marijuana.”

And Wilburn said his late father, who was diagnosed with Alzheimer’s, could have used medical marijuana as pain medication in the last two weeks of his life.

Cathy Glasson, a nurse from Coralville, said medical cannabis has been very effective in treating lots of very serious ailments.

“Medical cannabis is actually used to treat opioid addition,” Glasson said. “So evidence is showing that it’s actually beneficial in keeping (prescription opioids) from being a gateway drug.”

Andy McGuire, a medical doctor, said it should be doctors, not politicians, who decide which conditions can be effectively treated with cannabis.

Fred Hubbell, a Des Moines businessman, supports that approach, too, and called for making changes in the law.

“If we’re really committed to quality, affordable health care for all Iowans…the science is clear that there are a lot more medical illnesses and issues that medical marijuana can be actually be very beneficial for, much broader than what we allow in our state,” Hubbell said. “Other states have gone a lot broader than we have.”

Hubbell mentioned letting cannabis oils, pills and creams with a higher concentration of the drug THC be sold in the state.

Nate Boulton, a state senator from Des Moines, said the medical marijuana law must be expanded or the businesses that just won state licenses to sell cannabis products here won’t be profitable.

Current state law has set up a system for allowing cannabis products to be used as treatment for a limited number of conditions. Five Iowa dispensing sites have been chosen for Iowa-produced cannabis oils, pills and creams, starting this December.