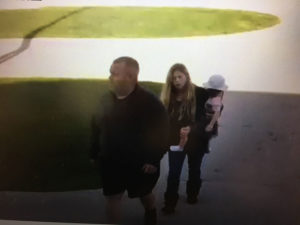 William and Jessica Ray with Dakota.

A missing South Carolina girl is safe in northeast Iowa after a cross-country odyssey that led to the arrest of her non-custodial parents near Decorah.

Winneshiek County Sheriff Dan Marx says it was an unexpected turn of events that transpired as the national search for the child concluded in his area with no shots fired, the couple jailed and the toddler in good health.

“It left us wondering how they ended up here and we do have some leads as to what those reasons were but it is still being investigated so I can’t get into those things at this time,” Sheriff Marx says, “Yeah, we were a little bit surprised that they ended up in this neck of the woods.” The girl’s parents, William and Jessica Ray, were arrested without incident near Bluffton in a car that was stolen in South Carolina.

Two-year-old Dakota Ray was with them when deputies moved in. “She is safe. She is in the custody of the Department of Human Services and with a foster family right now,” Marx says. “She was checked out medically at the Winneshiek Medical Center and she was released from there.”

A statewide alert was issued for the Rays after they were caught on surveillance cameras, with the two-year-old, at a hospital in Le Mars on Monday. Police in Camden, South Carolina said they were concerned about Dakota’s wellbeing because her parents are believed to be “heavy methamphetamine users.”

The sheriff was very pleased with how everything unfolded. “This is a classic case of when the public works together with law enforcement that good things do happen,” Marx says. “The reason they were caught, even though it does sound like they were probably staying in this area for some time, but once we were alerted to it by several public tips, they were caught in a matter of just a few hours.”

The Rays are facing theft and other charges in Iowa. They’ll be charged with kidnapping once they’re sent back to South Carolina.