You are here: Home / Business / Unemployment rate in Iowa holds at 2.8% 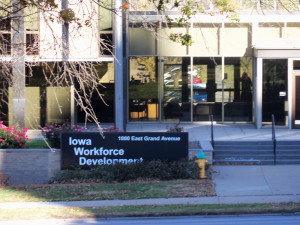 One year ago, the state’s unemployment rate stood at 3.3 percent.

A few hundred Iowans moved off the unemployment rolls in April compared to March. “The number of unemployed Iowans decreased to 47,000 in April. That came down from 47,300 in March. That current estimate is 7,700 lower than the year ago level of 54,700,” Kelly said.

Iowa businesses, combined, cut 1,300 jobs in April. The health care and social assistance sector trimmed 900 jobs. “That (monthly) loss was the first since October and we see that being partially due to staff reductions in continuing care and assisted living facilities,” Kelly said.

The report notes, compared to last April, 10,300 jobs have been added to Iowa’s total nonfarm employment and manufacturing has been responsible for most of the increase. The finance and insurance industry has added 2,800 jobs over the last 12 months.

The U.S. unemployment rate stood at 3.9 percent in April.