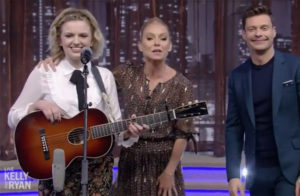 Maddie Poppe made the rounds on the national TV shows today hours after winning the “American Idol” competition. Poppe, who is from Clarksville, appeared on “Live with Kelly and Ryan” on ABC TV and told them it all hasn’t set in yet.

“Definitely not, Oh my gosh, it’s crazy,” Poppe says. Poppe says things leading up the final show were calm — then things took off as fellow finalist Caleb Lee Hutchinson announced they were dating and then there announcement of the winner.

“Yesterday we kind of all went in there, like you know America already voted, whatever happens happens. And…so much has happened, I won the show, my love life is exposed,” Poppe says. Ryan Seacrest also hosts “American Idol” and Poppe told him on “Ryan and Kelly” that they knew she was going to win before he made the announcement.

She says she was pretty sure she had won after getting a glimpse of the card. “I saw the big Maddie Poppe and I was like well, hopefully it doesn’t say this is the person who is getting cut,” Poppe says. Poppe is the first Iowan to win on the show and takes home $250,000 and a recording contract with Hollywood Records.