You are here: Home / News / Cities facing issues as they run out of space in cemeteries 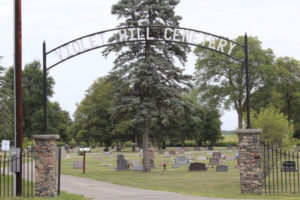 As Iowans prepare to decorate the graves of their loved ones this Memorial Day, some cities are struggling with cemeteries that are running out of space.

Iowa State University’s Carlton Basmajian is one of the few planners who studies cemetery use. “One thing that we’ve noticed just as I’ve working on this stuff as researcher for several years — is that a lot of communities don’t talk about it,” Basmajian says. “So the problem in a lot of places is running out of space. I mean, not every place of course, but that’s kind of the typical problem.”

He’s an associate professor of community and regional planning, and says city leaders aren’t the only ones who avoid the subject. Basmajian says the public doesn’t really bring the issue of cemetery space up, so it is less visible than you might expect. Basmajian says part of the problem is the general discomfort people sometimes have with talking about death. But he says the issue of creating more cemetery space goes deeper than that.

“It’s also a tricky land-use issue because you are talking about creating the case of a cemetery at least — whether it be for a full body burial or for scattering cremains or whatever — you’re talking about creating a relatively permanent use in the community. And depending on the circumstances, that would be land that would otherwise be valuable for development,” according to Basmajian. For rapidly expanding areas, giving up prime development ground to expand a cemetery isn’t an easy sell.

“So it’s kind of a double edge, I think there’s the creepiness factor, but there’s also the issue of allocating land to something that’s not going to be especially profitable for a very long time,” Basmajian says. Many cities have found their cemeteries that used to be on the edge of town are now surrounded by development and there is no room for expansion. That’s a concern for keeping those operations running.

“‘With cemeteries the major generator of revenue is the cost of selling land and burying people. And if you don’t have land to sell…if the burial plots are all full, then you’ve run into kind of a financial issue too,” according to Basmajian. “You have this big plot of land that’s got to be managed, it’s got all this infrastructure in it which is fragile out in the weather all the time. And you don’t really have an easy revenue source to keep it up.” He says most communities haven’t built a cemetery since the 1950s, so there’s been more than half a century of no expansion and no planning.

Basmajian says as the baby boomers grow older, this is going to be a major issue in the next 30 years.