You are here: Home / Fires/Accidents/Disasters / One hurt as new truck ends up inside Sioux City business 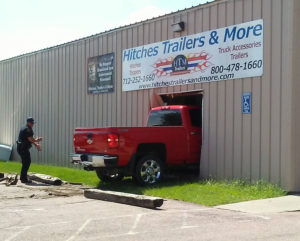 This new pickup was accidentally driven into a Sioux City business.

A Sioux City man who was taking his brand new truck to be detailed today will end up requiring more than a wash and wax on the pickup.

Police Sergeant Scott Hatting says the  73-year-old man was pulling into “Hitches, Trailers and More” around 11 a.m when something went wrong. He says the man accidentally step on the gas instead of the brake as he was pulling in to park and the truck went through a window of the building and struck an employee who was working inside.

The employee was taken to the hospital as a precaution with minor injuries. Hatting says since the accident happened on private property the truck owner would not be cited. “But clearly he’s at fault. The damage to his vehicle is probably around eight thousand dollars I would guess just for paint. And the building — substantially more — just because a lot of property was damaged inside as well,” officer Hatting says.

The unidentified driver was not hurt and had just bought the 2018 pickup Tuesday.