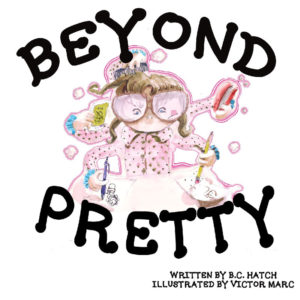 A former contestant on the TV show, “America’s Next Top Model,” has written a children’s book that urges adults to compliment something other than a child’s appearance.

Author Corinne Hatch will be visiting Iowa this week to promote her book, “Beyond Pretty.” Hatch says she grew up in a world where the focus of praise given to little girls always centered around beauty.

“‘Beyond Pretty’ is an alphabet book that highlights many of the examples that we should be telling little girls, outside of just focusing on their physical beauty, how they are amazing for having different personality traits,” Hatch says, “things like ambitious and brave, caring, daring, magnanimous.”

The book goes through each letter in the alphabet pairing pretty with empowering words for girls. “A is for pretty Ambitious; Girls who work hard to succeed. B is for pretty Brave; girls who don’t back down, even when they’re afraid…”

Hatch is the mother of a 20-month-old daughter and says the book is ideal to read to toddlers and for early readers. She says as friends and family would visit and see her girl, they’d constantly remark that she’s so pretty. While it’s nice to hear, she says that’s only part of the equation.

“It’s important to integrate other complements into our vocabulary when we’re speaking to young children,” Hatch says. “That’s the foundation for how they develop their personalities and how they develop the things they hold to be true about themselves and where they’re going to put their focus and what they’re going to try to cultivate in their personalities.” When working as a model, Hatch says she was discouraged to learn how shocked people were that she could carry on an intellectual conversation.

Hatch says society tends to believe beauty and intelligence are often times viewed as mutually exclusive attributes. “Many of the models I know have been traveling the world since they were 14 and they’re cultured and brilliant and they’ve experienced all of these different amazing things that have made them into that,” Hatch says. “I don’t think appearance has anything to do with your intellect but unfortunately, oftentimes we associate the two in a negative way.”

Hatch says she’s on a mission to encourage little girls to know they are capable of being strong and intelligent — as well as beautiful –individuals. In her only Iowa appearance, Hatch will appear at Beaverdale Books in Des Moines at 2 P-M on Saturday.