You are here: Home / News / Trunk of historic white oak tree on display 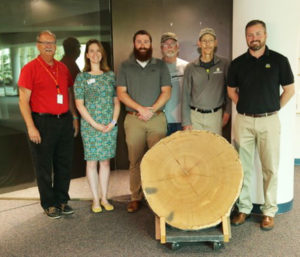 The cross section of the white oak.

A piece of what was once living history dating back before Iowa was a state is now on display in the atrium of the Wallace State Office Building in Des Moines. State Forestor Jeff Goerndt says it’s a cross section of a white oak tree.

“It’s about 442 years old — so it’s really a piece of natural history that we are able to hold onto,” Goerndt says. The tree grew along the Des Moines River north of Hartford in northeast Warren County. It fell down around 10 years ago and the trunk was finally recovered and two cross sections were cut. Goerndt says the rings of the tree were examined to estimate its age.

He says they took a bore and got a core sample from the three that is used to count the rings of the tree. Goerndt says trees don’t often grow a lot of rings in the first years, so they add ten or 15 years to the estimated age. Goerndt says trees this old are rare and they usually survive because they are hard to get to.

“Either they couldn’t be farmed or couldn’t be cleared because of difficulty of access,” according to Goerndt. “Or they’re actually poor quality trees that weren’t any good for lumber, so they weren’t logged. But they are getting more and more rate in Iowa.” He says you can learn a lot by looking at the cross section of the tree.

“You can see things like drought periods where the rings are tighter together and the trees weren’t growing as fast. You can see things like maybe a fire if there is a dark band within a tree cross section and the tree might have been damaged by a wildfire. You can see where a piece of metal might have been driven into the tree a hundred years ago — there might be a stained spot,” Goerndt says. The state forester says the white oaks can live a long time, but there is one tree that could end up having more growth rings.

“The only species that’s know in Iowa to outlive white oaks is red cedar,” Goerndt says. “Especially up in northeast Iowa. Up in some of the bluff country up there, there are some red cedar that are know to exceed five to 600 years old,” Goerndt says. You can view the white oak cross section at the Wallace State Office Building weekdays from 8 A.M. to 4 p.m. The other cross section of this white oak is at the Science Center of Iowa.