You are here: Home / Sports / Allgeyer is third Hawkeye to be drafted 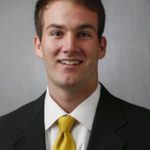 Iowa redshirt junior Nick Allgeyer became the third Hawkeye selected in the 2018 Major League Baseball First-Year Player Draft when he was chosen in the 12th round by the Toronto Blue Jays.

The left-handed pitcher from St. Louis was selected with the 356th pick. Allgeyer joins former Hawkeye Matt Dermody in the Blue Jays’ organization. He is the 18th player selected under Iowa head coach Rick Heller.

Allgeyer was a first-team All-Big Ten starting pitcher in his first season in Iowa’s weekend rotation. He finished the season with a 5-4 record and a 2.41 ERA over 97 innings, fanning 95. Allgeyer ranked in the top-four in the Big Ten Conference in strikeouts (second), ERA (fourth), and innings (fourth), while being fifth in strikeouts looking (26) and 10th in batting average against (.235).

After missing the 2017 season recovering from Tommy John surgery, Allgeyer posted a quality start in 13 of his 15 outings. His 95 strikeouts were tied for the second most in a single season in school history, while his 97 innings were the most since 2010 and the sixth-most all-time.

Allgeyer is the sixth starting pitcher to be drafted and the second-highest pitcher selected (Blake Hickman, 7th Round) during the Heller tenure.