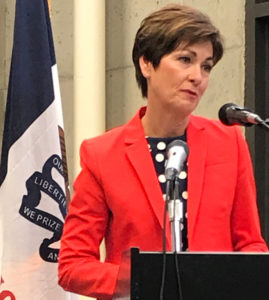 A spokeswoman for Governor Kim Reynolds has issued a clarification of the governor’s views on same-sex marriage after Reynolds seemed to call for a statewide vote on the issue.

The Iowa Supreme Court issued a unanimous decision in 2009 that legalized same-sex marriage in Iowa. A U.S. Supreme Court ruling in 2015 made it legal throughout the country.

On Tuesday afternoon, a spokeswoman for the governor said Reynolds believes the courts “weren’t necessarily the place” where the issue should have been decided, but Reynolds considers the issue “settled.”

A few hours earlier, Reynolds had discussed a statewide vote on a constitution amendment that would ban same-sex marriage.

“People have traditional views on what they believe marriage consists of and they have every right to have that, but it was decided by the courts,” Reynolds said during a news conference in Pella. “And I have said from the very beginning my position has been that it probably should go to a vote of the people and they should weigh in and then we would stop this back and forth.”

The governor’s communications director indicated that was Reynolds’ view in the past, not the present.

The Iowa Republican Party’s platform that will be ratified Saturday at the GOP’s state convention calls for repealing “any laws allowing any marriage that is not between one natural man and one natural woman.” Reynolds told reporters the platform provides the “guidelines” grassroots Republicans hope elected officials will advance.

“But it’s not something that every single candidate has to abide by,” Reynolds said. “It is kind of an over-arching goal of what the party is working on.”

Reynolds told a reporter who asked if she supported the party platform’s call for a ban on same-sex marriage that she’s focused on economic issues instead.

“We’re going to talk about reducing taxes and continuing to create an environment where our job creators and businesses…will feel confident in investing and continuing to grow in the state of Iowa,” Reynolds replied.

(This post was updated after the governor’s communications director issued a written statement.)