You are here: Home / Fires/Accidents/Disasters / Neighbors with blanket help save Cedar Rapids man from fire 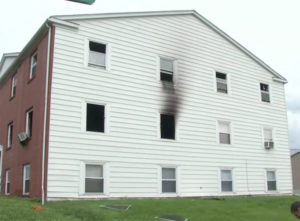 Neighbors helped get people out of this Cedar Rapids apartment during a fire. (KCRG TV photo)

Some residents of a Cedar Rapids apartment building escaped out windows after it caught fire last  night.

Justin Robinson lives next door and told KCRG TV he called the fire department after hearing shouts for help coming from the building at 2135 Blairs Ferry Road NE. “I look out my door and there were a couple people hanging from a window on the second story there with smoke just rolling out by them,” Justin Robinson said.

Robinson did what he could to help those evacuating the three-story building. Ashley Hanson also lives nearby and told KCRG TV she had joined a group of others who were trying to help those dangling from the burning structure’s windows. “There was one guy hanging by his hands,” said Hanson. “There was probably six or seven of us that just stretched out a blanket to catch him.” The blanket worked. “We caught him. It’s king of crazy, I’ve never seen it unless you look in movies,” she said.

Firefighters were able to make quick work of the flames getting them under control about 10 minutes after arriving. The building was left uninhabitable. “The second floor has extreme damage, third floor has heavy smoke damage and light heat damage and the first floor has water damage,” Andrews said.

Andrews said 10 of the 12 units were occupied at the time of the fire. He didn’t have an exact number of displaced residents but said the Red Cross would be available for housing assistance. The cause of the fire has not yet been determined.