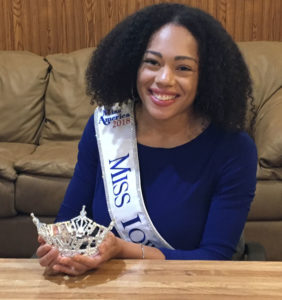 For only the fifth time in Iowa history, the young woman who now wears the Miss Iowa crown is a person of color.

Twenty-one-year-old Mikhayla Hughes-Shaw is a University of Iowa student and she was the first African-American to win the title of Miss Clinton County, the longest running county pageant in the state.

“When I say that is just an amazing feeling to know I was able to break a barrier, it really is,” Hughes-Shaw says. “I choose to wear this big, crazy afro of a hair when I compete because I want to show that you don’t have to change who you are in order to be amazing.”

The first African-American woman to compete for Miss America was Miss Iowa 1970, Cheryl Brown. Nearly three decades later, Jennifer Caudle won the Miss Iowa title in 1999, followed by two other young black women, Pauli Mayfield in 2010 and Mariah Cary in 2012. Recent rule changes in the competition will eliminate the swimsuit and evening gown portions of the contest next year.

Hughes-Shaw says it’s “bittersweet” to see the lifestyle and fitness portion end. “You spend so much time preparing mentally and physically for being on stage in six-inch heels and in a swimsuit,” she says. “It’s like, ‘Hey, this is me, this is all of me,’ but at the same time, I do understand what Miss America is trying to do. They’re trying to judge women on who they are and not what they look like.”

In her year ahead as the new Miss Iowa, Hughes-Shaw says she wants people to remember she’s a “normal person.”

“You can come up and talk to me,” she says. “Just because I have a crown on my head does not mean anything. It doesn’t mean I’m better than someone. It just means that I have chosen a way of reaching people in a very unique way. Please, don’t hesitate to approach me. I want to meet everybody in the state of Iowa.”

Hughes-Shaw, a native of Rock Island, Illinois, is taking the year off from the University Iowa and she intends to return to graduate with a journalism degree in 2020. She hopes to become a TV reporter. Hughes-Shaw was crowned Miss Iowa on June 16th in Davenport. She will compete for the title of Miss America in September in Atlantic City, New Jersey.