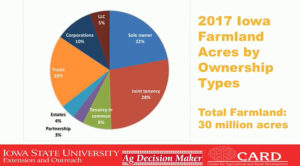 “About 22 percent of the land is owned in the structure of sole ownership. Another 28 percent is owned in joint tenancy — which is often between a spouse, husband and wife — and eight percent are tenants in common or other sorts of co-ownership structure,” Zhang explains. He says the co-ownership is often among siblings. Twenty percent of the farmland is owned by a trust, with many of them what are called revocable trusts, which means the ownership can be changed.

“Typically they last for the lifetime of the owner who set it up…and the beneficiary tends to be the kids or grandkids of the current owner. So, it’s mainly used for the tax planning, estate planning or transition planing purposes,” according to Zhang. He says 10% of the farmland is held in corporations that include families and are also used for tax planning purposes.

Zhang says the use of trusts has increased since 1982 when only one percent of the farmland was structured that way. “Declining is sole owners and joint tenancy. So, over time there’s a gradual movement moving away from more individual ownership — especially sole owners to a more institutionalized ownership in terms of trusts and corporations,” he says. Another key finding in the survey is that 82% of the owners have paid off the land. Zhang says the amount of debt-free farmland impacts values.

“Farm income has declined by almost half off the 2013 peak, but the farmland values have only declined about 15%. One of the key reasons is a lot of the owners have no debt — so they are not in a position to sell their land.” The survey found 20% of farmland was owned by the same person for at least 40 years and 55% of the land was owned by the same person for more than 20 years. That stability also helps land values.

“Farmland tends to be a long-term investment, not a whole lot of people are flipping farmland, so you see a very low turnover and the limited turnover tends to support the higher land values,” Zhang says. The state started requiring a survey of who owns Iowa farmland every five years beginning in 1949.