You are here: Home / News / Former Iowan plans to bring back the sound of Ray Conniff’s band 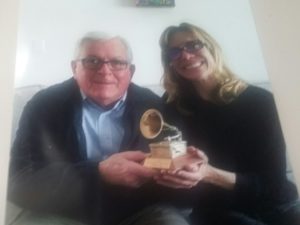 An Iowa native plans to revive the music of the late Ray Conniff, a band leader who was widely popular in the 1950s and ’60s.

Rick Gerber, a band leader in Branson, Missouri, is forming a new orchestra along with an eight-man, eight-woman singing ensemble.

Gerber says Conniff helped vault many other singers to fame before creating his own band.

Gerber says, “Ray Conniff was the arranger/conductor of all of Johnny Mathis’ early hits and other singers that were on the Columbia label, Rosemary Clooney, Tony Bennett.”

Conniff, who died in 2002, still holds a world’s record for releasing 94 albums under his own name. Gerber says Conniff was a big celebrity to audiences around the world in decades past.

Gerber’s new band, which he’ll lead and direct, will start performing this fall. He previously was leader and director of a special unit of the Glenn Miller Orchestra in Los Angeles.

Gerber is a 1959 graduate of Kamrar High School in Hamilton County.