You are here: Home / News / Costly mistake by contractor will extend construction time on Highway 30 bridge 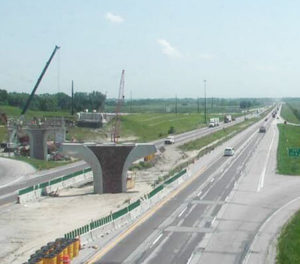 DOT camera view of bridge piers at I-35 and Highway 30.

One of the largest and most expensive road construction projects in Iowa is being delayed because of a big mistake.

A flyover bridge is being built to serve as a new exit ramp to U.S. Highway 30 for motorists heading northbound on Interstate 35 at Ames. Iowa Department of Transportation engineer Scott Dockstader says the contractor, Minnesota-based Minnowa Construction, messed up.

“The bridge is being built right now and we have piers in the middle. Our contractor that’s constructing the bridge made a few mistakes with the elevation of the piers and more importantly, the anchor bolts that go into the piers to connect the beams aren’t positioned properly,” Dockstader explains.

Workers are now using jackhammers on the six piers that were built too high and will be pouring new concrete to correct the mistake. “To make those repairs they are chipping down the concrete to get down to those anchor bolt sleeves to get them positioned properly and while they’re there, they will fix the elevation error also,” Dockstader says.

Construction of the flyover bridge was originally estimated at 23 million dollars. The contractor, not taxpayers, will be on the hook for the costly error. Dockstader says Minnowa will forfeit a lot of money for each day the project runs behind schedule. “We have liquidated damages on the project of $5,500 per day,” Dockstader says. “We set this project up to be a two-year project, more than likely, because we have 240 working days. Any of these delays will count against those working days, so it’s very likely the contractor will be in liquidated damages at the end of the project.”

Around 40,000 vehicles pass through the intersection daily. The new flyover bridge was supposed to be ready for traffic by the end of this year. For now, because of the mistake, it’s unclear when the project will be finished. Dockstader says, when completed, the bridge will be much safer for motorists who currently exit I-35 northbound using a cloverleaf ramp.