You are here: Home / News / Iowa’s best breakdancers gear up for weekend showdown 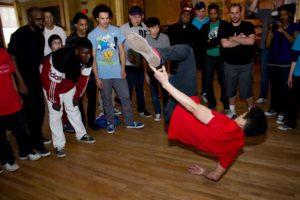 While breakdancing is often associated with the 1980s, a new generation of Iowans as young as eight years old is devoted to the art form, which is centered around hip-hop music.

Tommy Vuong, of Des Moines, is helping to organize a competition this weekend for breakdancing — what he calls breaking — and he emphasizes it takes a lot of practice, patience and discipline.

“I’m the healthiest I’ve ever been because of breaking, because of how much it pushed me to want to keep bettering myself and to maintain my physical health,” Vuong says. “On top of that, it just looks really, really cool.”

Ranging from elementary school-aged kids into their early 30s, the dancers will be showing off their moves. That includes the signature spinning head-stand, which Vuaong says can take years to master.

Breaking is much more than dancing, according to Vuong. He says it’s inspired his fitness, creativity, education and career goals. Growing up in a rough Des Moines neighborhood, the 22-year-old Vuong says he was considering joining a gang before he found breakdancing.

“Dancing saved my life. This culture saved my life,” Vuong says. “It has built good ties to my parents. It has helped me stay committed with the things I’m passionate about in my life. It’s really helped me understand how to problem solve and without all of this, I think I would’ve went down a really terrible path.”

The event will be underway at Jordan Creek Mall from 4 to 8 PM Saturday at the west end of the first floor. Admission is free.