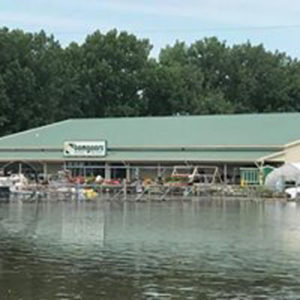 Weeks after heavy rain damaged more than 80 homes in a northwest Iowa town, officials are looking into installing permanent barriers to protect buildings from future flooding.

Rock Valley City Administrator Tom Van Maanen says they are considering installing concrete walls or building dirt mound structures to help the city withstand flooding. He says an engineering firm is assessing the costs of both options and the city will need to work with 10 property owners to acquire land easements for the structures.

“That’s really the hard part, when the flood water goes down — having people remember what a disruption it became to their property and how working with the city we can create a permanent solution for them,” Van Maanen says. The city saw a similar extreme flooding event in 2014.

Van Maanen says they laid out sandbags to protect the area and built barriers that cover about 15 percent of where they’d like to see permanent berms in the future. Those berms that will be able to withstand flooding and high water pressure. “The most vulnerable areas will be where we’ll target our money first, but it’s something hopefully in the next four five years we can complete a berm that encompasses our community,” according to Van Maanen. He says the berms would be built along the Rock River Corridor.

The heavy flooding on the Rock River is also believed to be responsible for a train derailment and crude oil spill last month. The oil did not get into the Rock Valley water system — but the city will continue to test drinking water wells for petroleum and other crude oil byproducts once a month.