You are here: Home / Health / Medicine / New Medicare cards on the way to Iowans 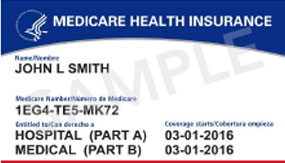 If you’re on Medicare you should be seeing a new card showing up in your mailbox sometime soon.

Julie Brookhart, a spokesperson for the Centers for Medicare and Medicaid Services, says the new cards will no longer use your Social Security number to identify you. She says that’s the only thing that is different, as it does not change your Medicare benefits.

Brookhart says they’ve been getting requests for years to take the Social Security numbers off the Medicare cards and says it actually took legislation in 2015 to get it done. They have been working since then to change everything over for the new cards.

The Social Security numbers have appeared on the cards since the program began back in 1966. She says the change was made for security reasons. “It does reduce the risk of personal identity theft, and also helps with health care fraud,” Brookhart says. She says you can help ensure your new card gets to you. Brookhart says they want you to make sure your proper address is on file with the Social Security Administration. You can update your address by calling 1-800-772-1213.

Brookhart says some of the more than 600,000 Iowans in the program may have already received the new cards and others will be arriving in the mail in the next couple of weeks. “If you don’t get it by the second week of August, there’s several options,” according to Brookhart. “You can call 1800-MEDICARE, which on your phone is 1-800- 633-4227. You can tell them that you haven’t gotten your card, they’ll probably verify your address and then mail you out another one, because it’s probably just a bad address.”

You can also take care of it online. “You can create an account at MyMedicare.gov. And then create your own user I.D. and password. That’s the secure health care portal for Medicare. And if your card should have been mailed it is going to show up in that account and you can actually print your own card from that account,” Brookhart explains. “Now we call it a replacement because it’s not going to show up as the picture there until your the card has been mailed.” Brookhart says the new Medicare card doesn’t replace any of the other cards you need for your health care.