You are here: Home / News / Hubbell raps Reynolds for ‘toeing the party line’ on trade war 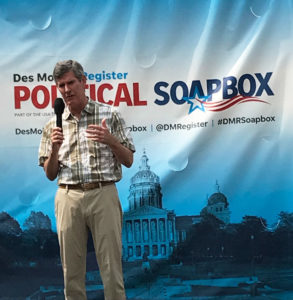 Fred Hubbell, the Democratic candidate for governor, today said the private lobbying Republican Governor Kim Reynolds has been doing with President Trump and his top aides on trade issues isn’t the right approach.

Hubbell said Reynolds has “an obligation” to make it clear through public events with farmers and businesses that Trump’s trade war is causing “personal pain” in Iowa.

“Let’s talk about these tariffs and the trade war,” Hubbell said during a midday speech at The Des Moines Register’s “Soapbox” at the Iowa State Fair. “We need a governor who’s going to stand up for Iowans, not stand up for who’s in Washington, D.C. When you’re elected governor, you’re elected to serve the citizens of our state, not a party and who’s ever in DC. It doesn’t matter who it is. You have to represent Iowans.”

After his speech, Hubbell told reporters Reynolds has “been toeing the party line” on the trade war.

“I mean, there are a lot of people on the edge and it’s not just farmers, but it’s the implement dealers, it’s the suppliers of the implement dealers, it’s the people who have shops on Main Street. This affects our entire rural Iowa community and it’s not acceptable to just say: ‘Well, let’s be patient. It’s going to work its way out,'” Hubbell said. “We need somebody that’s going to stand up for Iowans and put Iowans first, regardless of who’s in the White House and regardless of who their party is.”‘

Hubbell gave a nearly 20 minute speech at the fair early this afternoon, touching on the main themes of his campaign. He vowed to restore collective bargaining rights to teachers and state employees and re-establish state funding for Planned Parenthood. He promised to sign a bill that would raise the state minimum wage and let cities and counties set a wage rate that’s higher than the state’s. Hubbell also said the mental health reform package Reynolds signed into law this spring isn’t doing enough to boost access to counseling and in-patient services for Iowans.

“It’s time to stop the rhetoric and start making improvements,” Hubbell said, to cheers from his supporters.

A small crew of critics chanted briefly during Hubbell’s speech. Someone at the edge of the crowd held up a Younkers “going out of business” sign before Hubbell started speaking, but signs are not allowed at the “Soapbox” venue during candidate speeches. The Reynolds campaign has criticized Hubbell’s management of the department store chain in the mid-80s and early ’90s.

“We made decisions to try to support and protect the thousands of employees we had at Younkers and the thousands of customers and their suppliers who depended on Younkers, just like John Deere had to do in those days and a lot of other businesses all across the state,” Hubbell told reporters. “We didn’t like making those decisions, but sometimes you can’t take care of everybody. You’ve got to take care of as many people as you can.”

Hubbell said Reynolds is attacking his record as a business executive because “she doesn’t have a positive record to run on.”

Reynolds released the following written statement after 3 p.m.: “Nobody wins in a trade war, and the administration knows where we stand. I am meeting with farmers regularly and they know I am fighting for them and have been for years. I have led trade missions across the globe promoting Iowa products, went to Washington to defend free and fair trade, and successfully fought to preserve the RFS, and I’ll be making my case for biofuels again when EPA Secretary Wheeler comes to the Iowa State Fair next week.”