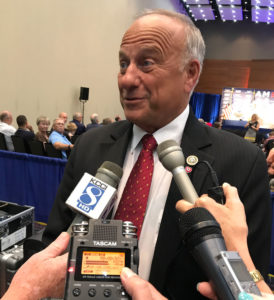 Republican Congressman Steve King today said the best thing the Trump Administration could do to alleviate farmers’ angst about the trade war would be to allow higher percentages of ethanol to be blended into gasoline year-round.

“Let the market determine what that blend could be It could go E15, E20, E30, all the way up to E85,” King said. “If the administration does that, I will tell you our producers here would be happy and they would be a lot happier than the promise of $12 billion distributed. They want to earn and they want to trade.”

“Administrator Wheeler is cautious. He’s afraid that if he opens up the door for E15 and beyond that there will be litigation,” King said. “The argument I made to him strongly is if you’re trying to get two stakeholders to agree, the one that already holds the advantage is never going to agree, so you have to go ahead and do what’s right.”

King is among those attending an event featuring Vice President Mike Pence this afternoon in Des Moines. King said the 2017 tax bill was an early Christmas present that is still giving and has created confidence and optimism in the business community.

“The cloud that looms over us is the one of “where does trade take us?'” King said. “But many of them say, ‘I’m willing to ride this thing out if we get a better deal on the other side.'”

King spoke with reporters before the event started. King said he’s warned the Trump Administration things “will get pretty tense” in Iowa if there’s no progress on trade deals by the time soybeans are maturing in September.