You are here: Home / Education / State universities trying to teach composting to students 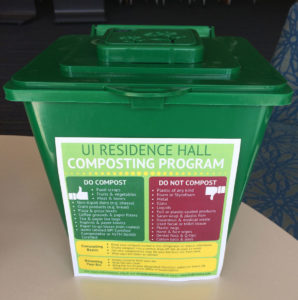 The University of Iowa is offering 1,000 individual compost bins to first-year students and others who live in dorms. Beth MacKenzie, the U-I’s recycling coordinator, says there are composting programs being held today and Friday where the bins are being handed out.

“They’re small green bins. They’re about a gallon and a half in size,” MacKenzie says. “They have a little sign on the front of them that tells you what can and can’t be composted. Each student that signs up for the program will receive one of those as well as some educational materials.”

The goal is to get students to compost even a pound or two a week to recycle their food waste and keep those leftovers out of the landfill. “Ideally, we would prefer they not have any food waste,” MacKenzie says, “so, it’s one of those balances between we don’t want them to generate food waste in the first place, but if they do, you want to make sure that it’s composted.”

In addition to food and scraps, the compost bins can also be used for things like tea bags, paper towels and pizza boxes. There is a concern about the bins eventually raising a stink, and MacKenzie has a solution. “We are educating the students who do choose to enroll on the importance of making sure they’re emptying it regularly, wiping it out to remove any food residue,” MacKenzie says. “We’re also suggesting that they keep it in their refrigerator, if they have one. That will slow down the decomposition and reduce the odors and potential pests.”

Iowa State University’s Compost Facility is now in its 11th year and has the capacity to take in 10,000 tons of waste. Manure from ISU’s Dairy Farm accounts for about 80% of the facility’s incoming material.

The University of Northern Iowa is offering students a downloadable composting toolkit from its Residential Food Waste Reduction webpage. Food waste from UNI’s dining halls is composted into fertilizer and soil supplements for the Panther Plot student garden — which grows fruits and vegetables that are featured in the dining halls, completing the cycle.