You are here: Home / Fires/Accidents/Disasters / Search to continue today for missing kayaker in Cedar Rapids 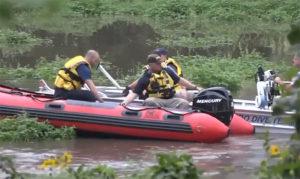 The search will resume today for a man on Indian Creek in Cedar Rapids after the kayak he was on overturned around 4:15 p.m. Monday.

Firefighters were able to take a boat upstream and rescued a woman who was also in the kayak. Crews searched until nightfall Monday and spokesman Greg Buelow talked with KCRG TV about the operation.

“Clearly this now becomes a recovery operation at this point unless something miraculous and he’s something down stream further,” Buelow said. Police believe the kayak hit a large pile of logs. That’s when the woman was able to climb on top of the logs and scream for help. The man fell under the logs, and hasn’t been seen since. People nearby spotted the situation– and threw the woman a rope to hold onto. Firefighters quickly arrived and had to go into the water to get the woman.

Multiple agencies searched for the man after this, with rescue boats and even drones.  Buelow says the water currents and weather conditions made the search more difficult. “According to some people around here they’ve said this is one of the fastest they’ve seen it move. This is particularly dangerous in this area,” Buelow said. Neither person was wearing a life jacket. The man and woman are believed to be in their 30’s.

Conditions were made worse by heavy rains in eastern Iowa. The storms also brought what is believed to be a tornado to Cedar Rapids as several trees and power lines were knocked down. There was record rainfall reported in Waterloo and businesses along Main Street in Cedar Falls were sandbagging due to flooding in the area.