You are here: Home / News / Maddie Poppe concert in Clinton sold out 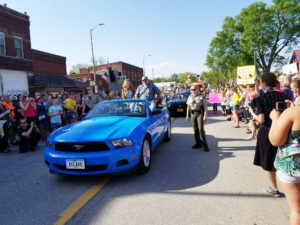 Maddie Poppe in the parade through her hometown of Clarksville.

If you were hoping to see Iowa native and “American Idol” winner Maddie Poppe this weekend, you’re likely out of luck if you don’t already have a ticket.

The 20-year-old Clarksville, Iowa native is schedule to perform at the Wild Rose Casino in Clinton tonight. The casino’s ticket site says the show is sold out. Poppe won the most recent American Idol TV competition. Although she performed across Iowa for several years before the show, she has been on the Idol tour in recent weeks.

The appearance in Clinton is her first in Iowa since winning the competition. Since her Idol victory, Maddie has appeared and performed on multiple TV shows. After her Clinton performance Poppe, has a stop in Des Moines on Sunday at a girls’ empowerment event, and then a show at the Wild Rose Casino in Jefferson on September 28th.