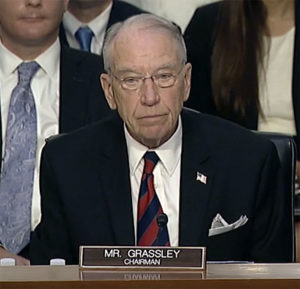 Senator Chuck Grassley’s office has received a declaration from an attorney working for a third woman who accuses U.S. Supreme Court nominee Brett Kavanaugh of misconduct.

Grassley’s communications director issued a statement, saying lawyers on Grassley’s staff and lawyers who work for the Senate Judiciairy Committee are reviewing the information. High-profile attorney Michael Avenatti’s client accuses Kavanaugh of being present when she was gang-raped at a high school party.

Also today, Kavanaugh has released the written testimony he plans to give at Grassley’s Senate Judiciary Committee meeting tomorrow. Kavanaugh, in his prepared remarks, calls the allegations against him “false…far-fetched and odious” and  part of a “frenzy” to come up with “last-minute smears” that might derail his confirmation.

Grassley has asked a female prosecutor from Arizona to ask questions tomorrow of the Christine Blasey Ford, the woman who has accused U.S. Supreme Court nominee of sexually assaulting her when she was 15 and he was 17.

Grassley said prosecutor Rachel Mitchell will ask questions of  Ford and Kavanaugh instead of having Republicans on the Senate Judiciary Committee do the questioning. Democrats on the committee will still be able to ask questions of the two witnesses.

Grassley issued a written statement, calling Mitchell an experienced sex-crimes prosecutor who will “de-politicize the hearing and get to the truth, instead of grandstanding and giving senators an opportunity to launch their presidential campaigns.”