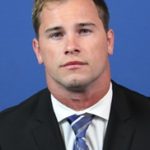 Drake defensive back Sean Lynch has been named the Pioneer Football League’s Defensive Player of the Week after leading the league’s top-ranked defense to another standout performance in a 42-25 win at Valparaiso Saturday.

Lynch led a defensive effort that allowed just 20 rushing yards and picked off four passes, three in the final five minutes of the contest to dash Valpo’s comeback hopes.

Individually, Lynch led the Bulldogs by matching a season-high with nine tackles, six of them solo stops. With 3:28 left in the contest, Lynch intercepted a pass and returned it 38 yards for a touchdown to account for the Bulldogs’ final touchdown of the contest.

Lynch and that vaunted defense return to Drake Stadium on Saturday for a critical PFL match up against PFL leader San Diego. Kickoff with first place in the league standings on the line is set for 1 p.m.