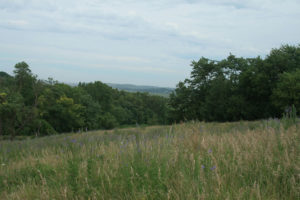 Environmentalists are working to protect 500 acres of southwest Iowa’s Loess Hills prairie from future development by turning it into a public area for hiking and birding.

A campaign is underway to raise $3 million to buy the piece of prairie, called Green Hill Ranch. Graham McGaffin, with the Nature Conservancy of Iowa, says with multiple ridges, native plants and birds, the ranch will be an escape for people from the busy Council Bluffs-Omaha area.

“By the time you get to what would be the east boundary of the property,” McGaffin says, “you can’t hear the highway, you can’t hear the metro, you’re pretty quickly lost in the Loess Hills.” The conservancy is working with the Iowa Natural Heritage Foundation to buy the land. The groups have already raised about $2 million toward the $3 million  goal.

The ranch is located in Pottawatamie and Mills counties and McGaffin says preserving it is a big deal. “As more and more of our state was planted into corn, beans and other crops, the Loess Hills and the steepness of the terrain really limited people’s ability to plant and grow crop agriculture,” McGaffin says, “so a lot of that native prairie that was once all across the state, relatively a lot is still in the Loess Hills.”

The Loess Hills have more than half of the state’s remaining prairie. Once purchased, the groups plan to transfer ownership to Iowa’s Department of Natural Resources which will manage the land as a place for hunting, hiking and birding.

(Thanks to Katie Peikes, Iowa Public Radio/photo courtesy of the Iowa Nature Conservancy)