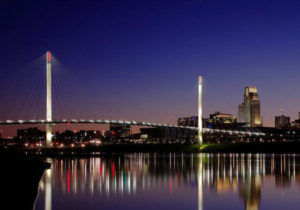 A National Park Service employee is credited with rescuing a man who jumped from a bridge into the Missouri River.

Biologist Chris Holbeck says he was in his office Tuesday morning when he noticed, from a window, something splashed in the water. Holbeck quickly realized it was a man who jumped from the Bob Kerrey Pedestrian Bridge that connects Council Bluffs and Omaha.

“So I called out to my colleagues to call 911 and I ran downstairs,” Holbeck said. “We keep a rescue ring by the back door because we’ve seen people jump from the bridge before.” Holbeck took the rescue ring down to the riverbank, but the current was pulling the man too far away.

“I couldn’t get to him. I kept calling to him to keep his head above water and swim toward shore,” Holbeck said. “Eventually, the boardwalk runs out and I lost sight of the guy.” Although he believed the man likely drowned, Holbeck continued to search the banks.

“I started searching the riverbank and sure enough, there he was and I pulled him from the river,” Holbeck said. According to Omaha Police, the jumper was taken to a hospital and will be okay.