You are here: Home / News / Concluding campaign messages as polls on Election 2018 open at 7 a.m. 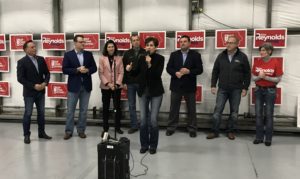 Gov. Reynolds and others on the GOP statewide ticket started campaigning Monday at the Ankeny airport.

Election Day is here. The polls in Iowa open at 7 a.m. and close at 9 p.m. Four congressional races are at the top of the ballot, followed by a competitive race for governor.

Republican Governor Kim Reynolds held a Monday morning rally in an Ankeny airport hanger before embarking on an eight-city tour.

“We have been crisscrossing this state and we are going to finish strong,” Reynolds said. “We are not going to leave anything on the table.”

“We need the votes of your friends and your relatives and your neighbors,” Hubbell said. “We’ve known it from the beginning. It’s going to be a close race.”

A Des Moines Register “Iowa Poll” conducted last week showed the race falling within the margin of error — Hubbell at 46 percent and Reynolds at 44 percent. Christopher Larimer, a University of Northern Iowa political science professor, has written a book about what has and hasn’t worked in recent governor’s races in Iowa. He’s closely watching this contest.

“The fact that it’s a toss up does not surprise me. That’s what we expected, I think, going in.” 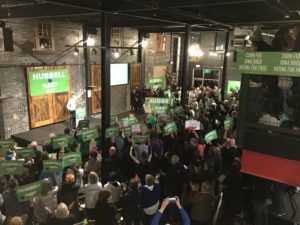 Fred Hubbell and other Democrats hold an Election Eve rally in Des Moines.

The “tribal mentality” in politics seems alive and well heading into this election, according to Larimer.

“People seem to be so entrenched within their own partisan groups, it just really seems to be coming down to which party is better at mobilizing their base,” Larimer said. “What is each party going to either get their voters enthusiastic or scare their voters about the other side?”

Once the votes are cast and counted, he’d like to compare 2014 and 2018 turn-out, to see which party was better at getting voters who normally just vote in presidential years to cast a ballot this year. He’d also like to do research on what techniques campaigns used to turn-out “irregular” voters who don’t typically participate in midterm elections.

Reynolds, backed up by the GOP candidates for four other statewide offices, concluded her Monday rally with the clarion call.