You are here: Home / News / Finkenauer among at least 98 women headed to US House 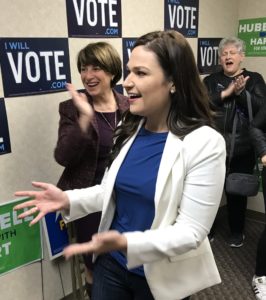 Congresswoman-elect Abby Finkenauer says she’s interested in serving on the Energy and Commerce Committee after she’s sworn into office in January.

“It’s something that we have to make sure that Iowa’s at the forefront in,” Finkenauer says, “that we’re investing in renewable energy and that we have the job training programs here available as well to fill the jobs that will be available as our economy continues to change.”

Finkenauer, a Democrat from Dubuque, finished about 16,000 vots ahead of Republican first district Congressman Rod Blum in Tuesday’s election. She’ll be sworn into office in early January. Finkenauer plans to schedule town hall meetings in the district.

“Listening to folks even who voted the other way and making sure you’re getting out there and hearing their concerns and having those conversations. I’m looking forward to those conversation,” Finkenauer says. “…That is something we’ve been missing nationally for a very long time and it’s something I want to get back to here in Iowa.”

Finkenauer, along with Congresswoman-elect Cindy Axne of West Des Moines, are the first women Iowa voters have sent to serve in the U.S. House. Finkenauer says government works best when all voices are heard.

“I’m excited to see the amount of women that ran up and down the ticket that were elected both to the statehouse and obviously federally as well,” Finkenaur says. “I think that’s incredibly important to make sure that we have diverse voices at the table.”

A record 45 women will serve in the state legislature in January. At the federal level, Finkenauer is among at least 98 women who won seats in the U.S. House.

“I know we still have work to do. We’re not at parity in the U.S. House and it’s something again that I’m excited to be a part of and excited as well to bring actually a working class view to Washington as well,” Finkenauer says. “I think that’s also important.”

Finkenauer made her comments today during an interview with Radio Iowa.