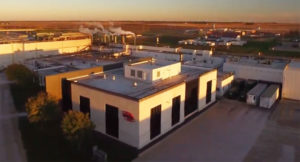 The Iowa Transportation Commission has approved a state grant of $501,452 to fund roadway improvements for a Nevada manufacturing business that makes pizza toppings.

DOT spokesman Craig Markley told the commission the grant will help Burke Marketing Corporation with a planned expansion. “They’re a wholly owned subsidiary of Hormel Foods and they manufacture fully-cooked meat products,” Markley says. “They are looking at doubling their production capacity and the associated capital investment would be a 164 million dollars.”

Markley says the grant comes with a promise of new jobs. “The project would result in the creation of 158 new full-time jobs and that would be added to their current 350 or so jobs,” according to Markley. He says the jobs will pay $20 an hour. The project is expected to be completed by October 2019.