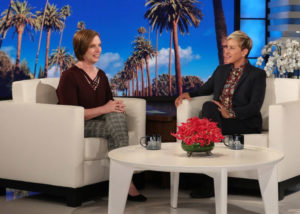 The winner of the largest-ever lottery prize claimed in Iowa is giving a big chunk of money to an organization that helps wounded veterans.

Lerynee West collected a lump sum payment of a little more than $198 million after her ticket matched all the numbers in the October 27th Powerball drawing.

The 51-year-old West, who grew up in Earlham, appeared on “The Ellen DeGeneres Show” Wednesday.

“It’s very important to me that we never forget the sacrifices soldiers and their families make for our country,” West said. On the show, West presented a $500,000 check to The Travis Mills Foundation.

“The Travis Mills Foundation has a very special place in my heart because my dad was a Vietnam vet and I come from a long line of people who have served in the military – three of my brothers,” West said. Shortly after West won the lottery prize, she formed The Callum Foundation, named after her grandson who was born at 24 weeks and lived for just one day.

West has said the foundation will address needs such as poverty and hunger, education, animal welfare, and veteran affairs.