You are here: Home / News / Busiest days of the year for airport travel are this week 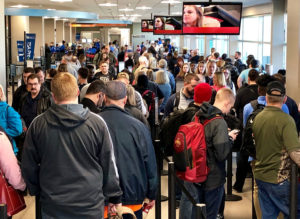 Iowa’s busiest airport will be infinitely busier this week as tens of thousands of people shuffle through the concourse to enjoy Thanksgiving feasts with family and friends afar.

Kevin Foley, executive director of the Des Moines Airport Authority, says the place will be packed, so strictly follow the advice about arriving at least 90 minutes before your departure time. “The projections are that this will be the heaviest travel season since 2005, so we’re looking for big crowds,” Foley says. “I know several of the airlines are bringing in extra flights on Wednesday and I know they’re looking at Tuesday now as well. So, it’s going to be very, very busy.”

Des Moines International Airport set a record for boardings in October, passenger numbers are up six-percent for the year, and Foley expects the intensity to continue through December. Do yourself a favor, he says, and look over the Transportation Security Administration website prior to packing and before heading for the airport.

“Check that TSA website. Know what will and won’t fly,” Foley says. “Check your airline’s website. Know what size of carry-on luggage you can take on. If the luggage is too large, you will have to check it at the gate and they will charge you an additional rate for that.” Foley has a special message for Iowans who want to take food they’ve prepared for the Thanksgiving meal onto the plane to share at their destination, or they plan to bring back leftovers from home.

“One national report said mashed potatoes won’t fly but a turkey will,” Foley says. “I don’t know who’s taking mashed potatoes or turkey through but the point it, turkey is a solid and mashed potatoes would be more of a paste.” Turkey, stuffing, pies and cakes are allowed through security as solids, but mashed potatoes and gravy — which are considered liquids — are not allowed in carry-on baggage.

Three days are expected to be the busiest days in the week ahead, Tuesday, Wednesday and Sunday. The best day to travel is likely Thursday, Thanksgiving Day. He notes, Des Moines International offers nonstop service to five of the ten most popular Thanksgiving destinations: Orlando, New York, Las Vegas, Dallas/Fort Worth and Washington, D.C.