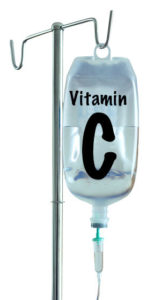 An apple a day may not keep the doctor away, but University of Iowa researchers are testing how massive doses of vitamin C could help fight three of the deadliest forms of cancer.

Doctor Joe Cullen, a U-I professor of surgery, is helping head up the study. He says they’re launching a new round of clinical trials in cancer patients using IVs of vitamin C along with chemotherapy and radiation. “Vitamin C acts as an antioxidant but we give very large doses and we give it intravenously and at those large doses, you get very, very high levels,” Dr. Cullen says. “So, we’ve increased the levels a hundred-fold and when you do that, it actually kills cancer cells.”

If you take vitamin C tablets that you buy at the drug store by mouth, Cullen says they have a limited usefulness. “If you take too much vitamin C orally, you don’t absorb as much and your kidneys just excrete it,” Cullen says. “We bypass all of those mechanisms when we give it intravenously. We give it at such a high dose that the kidneys can’t remove it that quickly and you get very high doses.”

Researchers at U-I’s Holden Comprehensive Cancer Center have just received a five-year, $9.7 million grant from the National Cancer Institute to continue the trials of high-dose vitamin C. Cullen says it promises to be a safe, simple, cost-effective approach to improving treatment for many kinds of cancer.