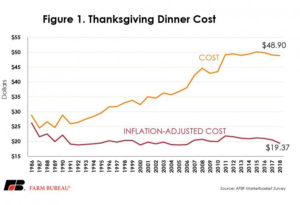 If you’re still debating whether to cook your own Thanksgiving meal or have someone else do it for you — the Farm Bureau says the home cooking option is cheaper.

Iowa Farm Bureau spokesman Andrew Wheeler says the organization’s survey this year found a drop in the cost of the goods for a ten-person meal. “Checked in at about $49 — so less than five dollars a person — so it tends to be a great value. This is the fourth consecutive year that the price has gone down,” Wheeler says. He says they looked into the cost of ordering the traditional turkey meal prepared and delivered for the first time this year.

“They found that there is a significant upcharge with the convenience of the delivery service. So, your best value if you are watching your dollars and cents would be to go to the store, shop around and find the best value,” Wheeler says.

“Just depends on whether it is worth to you or not for that little extra cost,” according to Wheeler, “but with the tremendous value of the Thanksgiving meal,   you may not even notice. It may still seem like a great value.” Wheeler says the down side to the low cost meal is the continued struggles in the farm economy with low commodity prices.

“Because farmers have been so efficient at meeting demand there is an increased supply out there. And unfortunately that just means low return for the particular farmer. But it is good news for the consumer when they go to the grocery store and it is less of a sticker shock,” he says.

Wheeler says for a lot of families the cost of preparing the Thanksgiving meal isn’t even a question — it’s more about the traditions passed down through the years. “I think that’s a big part of the family get together and the Thanksgiving. There’s a lot of staples, recipes that have been passed down through the years and each family I know has their unique fun family traditions,” Wheeler says. “While the delivery services and having it brought right to you prepared — that’s certainly convenient — but you do miss out on some of the tradition that families have come to know and celebrate for Thanksgiving.”

The Farm Bureau has conducted the survey on the cost of the Thanksgiving dinner since 1968.