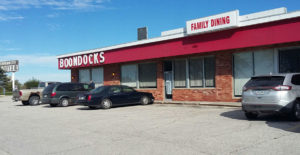 Anyway Logistics, Incorporated of Fresno purchased the Boondocks U.S.A. Truck Stop near Williams for $500,000 at an auction held on Wednesday. It will be the first truck stop to be owned by Anyway Logistics.

The Boondocks truck stop closed October 20th after 45 years of operation by owners Bob and Miriam Welch. They say they decided to close due to competition from nearby truck stops and finding enough employees to keep the place running. The truck stop hosts a diner and a 30-unit motel located off Interstate 35 near Williams.

The truck stop served as a haven for stranded motorists during adverse winter weather. No date has been set for the reopening of the truck stop.