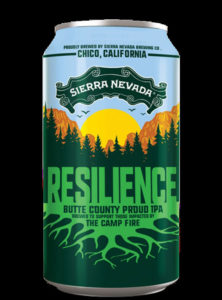 Iowa beer brewers are banding together to support those affected by the California wildfires.

Twenty-eight Iowa breweries are among more than 1,000 nationwide, all making the same batch, called Resilience IPA. Led by California-based Sierra Nevada Brewing, all proceeds from the beer will be donated to those in need. J. Wilson, at the Iowa Brewer’s Guild, says nearly a third of the state’s craft beer operations are involved.

“Breweries around the country that are signed on to brew this same batch of beer and to donate 100-percent of the profits,” Wilson says. “Iowa breweries, of course, like a lot of others heard the call and we have nearly 30 breweries that are participating.” Wilson says the effort is resonating with those who have friends and loved ones who are impacted by the disaster.

“I moved from California to Ankeny,” Wilson says. “One person that I spoke to, or exchanged emails with a little bit, she was just really excited to see that her adopted state is taking care of California as well.” Proceeds will go to partner organizations with the support of the California-based Golden Valley Bank Community Fund. What’s known as the Camp Fire is now the state’s deadliest and most destructive on record.

The fire started November 8th and has killed at least 88 people, destroyed more than 18,000 structures and scorched 153,000 acres of land. The fire’s estimated total cost is approaching $10 billion.