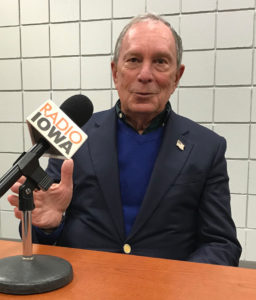 Former New York City Mayor Michael Bloomberg spent today in Iowa, touting a film about climate change that he financed and promising he’ll make a decision “early next year” about whether he’ll run for president and, perhaps, sell his business.

Bloomberg visited a business in Cedar Rapids that makes solar panels and chatted with community college students in Ankeny who are learning to maintain wind turbines. He met with “Moms Demand Action” activists seeking gun restrictions and spoke at the Des Moines premiere of a film highlighting people, including a few Iowans, who are embracing renewable energy alternatives. A past skeptic of ethanol subsidies, Bloomberg embraced the corn-based fuel.

“I think that ethanol and biofuels are part of the mix. There’s a place for it. I think eventually you’d like to get to a world where we don’t burn anything. That’s the way that you really clean the air the most, but we’re a long ways from that,” Bloomberg said this afternoon during a news conference in Ankeny. “…E10 or E15 is part of the mix and it’s going to be part of the mix for a long time.”

Late this afternoon, Bloomberg spoke with Radio Iowa for nearly 20 minutes, sketching out the purpose of a possible presidential campaign.

“You work hard,” Bloomberg said. “If it works, it works and if it doesn’t, it doesn’t, but my main objective would be to try to focus everybody on the main issues facing this country.”

Bloomberg, who is 76, served a dozen years as New York City’s mayor. Forbes lists him as the world’s 10th richest person, a billionaire who founded the Bloomberg media company focused on market information and news. Bloomberg was animated as he discussed trade wars and Tuesday’s market downturn, which Bloomberg said was caused by uncertainty about President Trump’s negotiations with China.

“I think that Trump is right in saying that the relationship we have with China is not fair. We haven’t fought that battle in a long, long time…We should stand up to China,” Bloomberg told Radio Iowa. “…Having said that, the way you do it is as important as the fact that you’re doing it.”

Bloomberg suggested Trump has erred by approaching negotiations like a “real estate promoter.”

“In his view, there’s a winner and a loser in every transaction and I think that’s a very simplistic approach to the world. You always want to have the other person to think they didn’t get everything they wanted, but they got something and they want to think you didn’t because you’re going to have to go back and do another deal at another time,” Bloomberg said. “…You don’t want to win each time. You want to move up.”

Bloomberg ran for mayor of New York as a Republican and as an independent. He investigated but never launched an independent bid for the presidency in 2016. Bloomberg then publicly spoke on Hillary Clinton’s behalf, but declared himself “an outsider” at the 2016 Democratic National Convention. If Bloomberg does run for president now, he’ll run as a Democrat.

“Well, number one, I was a Democrat all my life, but I think that I’ve had the same values for an awful long time,” Bloomberg told Radio Iowa. “The things that Democrats care about are things that I not only I can say that I’m in favor of, I’ve got a record to show that I have done a lot.”

In addition to climate change, Bloomberg cited issues like his support of abortion rights and initiatives to reduce tobacco use.  If he does run for president, Bloomberg told Radio Iowa he will either place his company in a blind trust or sell it.

“But I think at my age, if selling it is possible, I would do that,” Bloomberg said. “At some point, you’re going to die anyway, so you want to do it before then.”