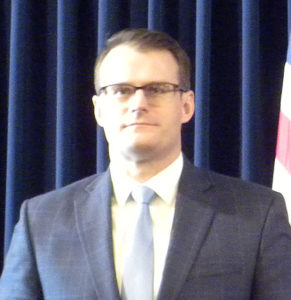 Changing the way a state tax credit is awarded to home builders is one of the recommendations in this week’s “Empower Rural Iowa” report. The “workforce housing tax credit” is currently awarded on a first-come, first-served basis.

“It doesn’t really matter if it’s the best project. It doesn’t matter if it’s shovel-ready. If you’re in line, that’s good enough,” Lieutenant Governor-elect Adam Gregg told Radio Iowa. “What we’re recommending is let’s turn that into a competitive program which will encourage communities, encourage developers to sharpen their pencil, make sure they’ve got a project ready to go and we can fund the projects that are ready sooner than others.”

Five million dollars’ worth of tax credits are available each year for developers who build homes in Iowa small — but the credits have already been claimed for the next five years. Changing the distribution of the “workforce housing tax credit” is a top recommendation from the “Empower Rural Iowa” working groups Governor Reynolds assembled this summer. The governor asked Gregg to lead the initiative.

“We had a short timeline and a focus on finding some concrete solutions that could be implemented quickly,” Gregg said, “some recommendations the governor could consider ahead of this next legislative session.”

The Empower Rural Iowa task forces are calling on the governor to create an “Office of Rural Affairs’ in state government. The group also highlighted the need for state subsidies to expand broadband service in rural Iowa.