You are here: Home / Sports / Iowa wins at Northwestern 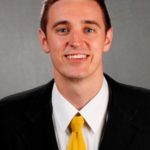 After battling to a 34-all tie at the half, Northwestern surged with a 10-3 run over the first four minutes of the second half to build a 44-37 lead. It was the Wildcats’ first lead of the game.

“I am proud of how we were able to respond to some adversity on the road and come out and get the road win.”