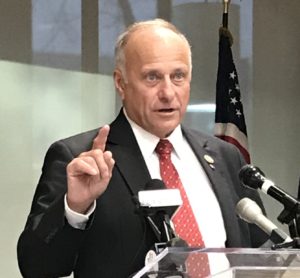 Republican leaders in the U.S. House this evening removed Iowa Congressman Steve King from all his committee assignments — a decision King has denounced as an “unprecedented assault on my freedom of speech.”

King had been a member of the Agriculture and Small Business Committees as well as the powerful House Judiciary Committee. House Republican Leader Kevin McCarthy on Sunday said King’s remarks about white supremacy have no place in the party of Lincoln.

“We spoke loud and clear,” McCarthy told reporters in Washington, D.C., this evening after the House Republican Steering Committee’s unanimous vote. “We will not tolerate this in the Republican Party.”

King, in a written statement, said removing him from committee assignments was “a political decision that ignores the truth.” King said the remark he made to The New York Times has been mischaracterized. McCarthy told reporters tonight it was “not the first time” King had made such comments.

King concluded his written statement by saying he “will continue to point out the truth” and vigorously represent Iowa’s fourth congressional district “for at least the next two years” — a strong hint he will run for reelection in 2020.

Randy Feenstra, the state senator from Hull who announced last week he will run for Iowa’s fourth district seat in 2020, tweeted this evening: “Sadly, today, the voters and conservatives values of our district have lost their seat at the table because of Congressman King’s caustic behavior.”

At least three Democrats in the U.S. House have drafted resolutions to have the House censure or reprimand King. The Republican leader in the U.S. Senate has also weighed in on the controversy. Senate Majority Leader Mitch McConnell of Kentucky said if King doesn’t understand why white supremacy is offensive, “he should find another line of work.”