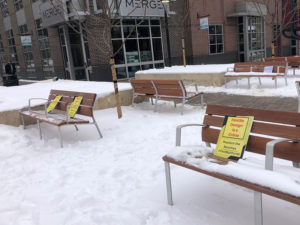 The new Iowa City benches have a bar in the middle.

During recent renovations, the city installed benches with a metal armrest in the center, replacing old ones that were easier to sleep on. Mayor Jim Throgmorton spoke with protesters on Monday and vowed he’ll talk with the city manager about the benches.

“I’m absolutely certain that we will tell him to purchase some new benches that do not have the armrest in the center and then they’ll be interspersed within the Ped Mall,” Mayor Throgmorton says. “So, we’re responding.” Advocates with a local drop-in shelter say past statements by city officials show the benches are intended to discourage homeless people.

The mayor says his comments were taken out of context. Iowa City resident Mark Montgomery says he slept on the old benches when he was homeless and he wants the city to walk back the changes. 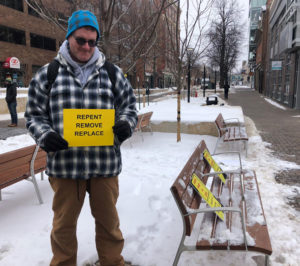 “You either bring back the old ones or just take the bars out. That’s all I’m asking for,” Montgomery says, adding: “I don’t ask for much. I’m pretty low maintenance.”

Mayor Throgmorton says the city is working to address homelessness and has invested millions of dollars in behavioral health care and transitional and affordable housing.