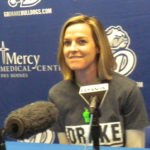 The Drake Bulldog women look to stay unbeaten in Missouri Valley Conference play on Friday night with a visit to Northern Iowa. Drake (12-4, 4-0 MVC) makes the trip to Cedar Falls coming off wins over Loyola and Valparaiso in the team’s only home games in January. The Bulldogs controlled the paint and dominated the boards as they played all 12 players in each win. No Bulldog played more than 25 minutes in either victory.

“We have not put 40 minutes together yet”, said Drake coach Jennie Baranczyk. “I think that is something we need to continue to strive for.”

UNI (10-6, 3-1 MVC) is on a three-game winning streak since it was edged in its league opener on January 4 at Illinois State by just two points. In addition, the Panthers have won seven consecutive games at home.

“When you get them to miss you have got to be able to box out”, said Warren. “They are one of the best I have seen at being able to turn you over and then turn those turnovers into points.”

The series started in 1975 and Friday’s game will be the 87th all-time meeting between the longtime in-state rivals who have played at least twice every season since the 1984-85 campaign. Drake leads the all-time series, 63-24, and holds a 7-3 advantage in the past 10 meetings.