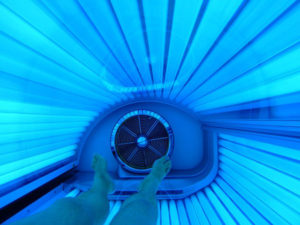 Along with getting formal attire, flowers, dinner reservations and a limo, many Iowa high schoolers also book a tanning bed to prepare for prom.

Leslie Van Bogart, who grew up in eastern Iowa, will be addressing students at a pre-prom event in Cedar Rapids this weekend, discussing her bout with skin cancer. “I was 16 years old and working at a tanning salon and constantly in tanning beds,” Van Bogart says. “I ended up getting diagnosed with basal cell carcinoma at the age of 19, just from using tanning beds so frequently.”

Many states bar people under 18 from using tanning beds. Iowa is among fewer than a half-dozen remaining states that have yet to impose tighter restrictions on U.V. tanning beds, which she says are completely banned in some states. “Tanning beds are in the same category as booze and cigarettes, proven carcinogens,” Van Bogart says. “Now that it’s been classified and people are more aware, I think UV tanning beds will honestly be obsolete in the next five to ten years.”

Being a skin cancer survivor, Van Bogart now runs a spray-tan business called Your Tanning Bar, with salons in Cedar Rapids and Coralville. She says it’s by far the safest alternative to having healthier-looking, darker skin.

“The technology behind spray-tanning is truly amazing, the fact that we can air-brush a tan right onto you, customize it to your skin tone now and make it look just like a natural tan outside without the harmful side effects,” Van Bogart says. “We, at our salon, use all-natural, organic products so it’s actually great for your skin.”

She says spray tans often last seven to ten days. The pre-prom event will include hair and makeup tips from industry experts, as well as a fashion show highlighting the latest dress and tuxedo styles, in addition to a vendor fair, refreshments and prizes. Van Bogart is among two skin cancer survivors who will be talking with the high school students who attend.

“I’m not that much older than them, I’m only 30, so hopefully they can connect on a level with me that I was in their shoes not that long ago and I was in and out of tanning beds,” Van Bogart says. “Hopefully, they can take my story and learn from it.” The cancer center at Mercy Medical Center in Cedar Rapids is hosting the event from 2 to 4 P.M. Sunday.

Cancer is Iowa’s leading cause of death with more than 17,400 Iowans diagnosed every year. Skin cancer is the most common of all cancers. Melanoma, a more dangerous type of skin cancer, accounts for almost 10,000 skin cancer deaths nationwide each year.